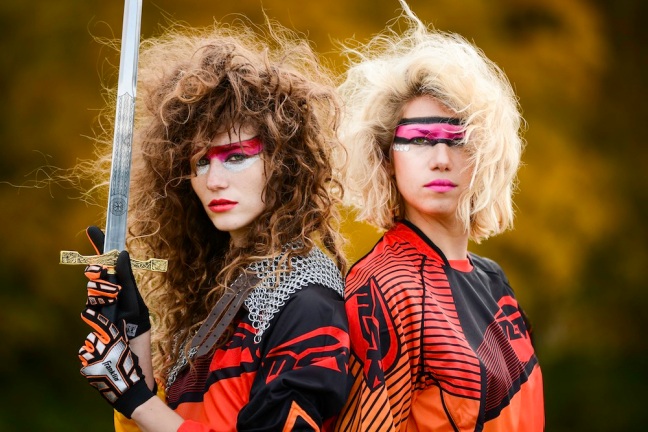 Brooklyn’s sister psych duo Prince Rama began writing their forthcoming record, Xtreme Now while living on a black metal commune in Vȫrmsi, a remote island off the coast of Estonia. There, according to a press release, Taraka Larson had a near-death experience inside an ancient Viking ruin which sparked a recurring sense of time-schizophrenia — or the physical sensation of existing in multiple time periods simultaneously. Through this out-of-body experience, Taraka and her sister Nimai conceived of a futuristic, new adventure genre for their album they’re coining as “extreme sports.” Did we mention their journey was also fueled by Monster Energy drink?

Regardless of what you make of Taraka’s prophetic vision, there can be no doubt of the ensuing creativity that came of the duo’s exploits. With the help of acclaimed dance producer Alex Epton (Björk, Panda Bear, The Kills), the Larson sisters have created a fearless record that “celebrates the ephemerality of life, dancing just at the edge of death’s gilded smile.” The LP’s first single “Bahia” (below), recalls the Italo-disco beats of Giorgio Moroder with its emphatic flourishes and eminently danceable melodies.

Xtreme Now is out March 4 on DC label Carpark Records, accompanied by their record release show at Baby’s All Right in Brooklyn. The following day they’ll be performing at Comet Ping Pong in the District, a seemingly perfect venue for their vision to come to life.